Benefits of Wearing the Ruby Gemstone

Manik Mani or the Ruby is a gemstone held very preciously amongst Royalty all around the world.

Considered one of the ‘Big Three,’ the Ruby Gemstone holds its place as a highly coveted gem alongside the emeralds and sapphires.

Ruby comes from the Latin word ruber meaning red. According to Sanskrit records, Ruby was known as Ratnaraj or the ‘King of Gems.’

The Ruby’s soft pinkish tinges to deep blood red hues evoke a sense of passion that is almost amorous in nature. Burma Rubies are particularly sought after for their high quality while strikingly rich Pigeon-blood Rubies are the biggest charmers. 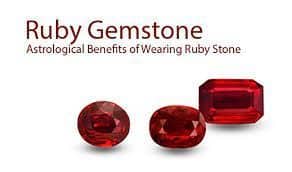 According to Vedic Astrology, the Ruby guides one to achieve their potential kingly status. This makes it a well-rounded gemstone that helps any professional from any line to succeed on their professional front.

There are myriad benefits that Ruby stone has to offer. Here are a few of them:

With the Sun in your corner, Ruby wearers are bound to strengthen the paternal relations in their life. Estranged and strained father-child relationships shall benefit from the positive effects of Ruby.

The Ruby stone supports its wearer by helping them achieve success and fame in their dream job. It encourages and boosts creativity and self-confidence in the person, making them a go-getter in all aspects of their life.

Attributed to improving social standing, the Ruby gemstone helps one elevate their status. It dials down inhibitions and promotes confidence which attracts popularity.

The Ruby stone elicits warmth, passion, and love in turn enhancing the quality of marital relationships.

If you are tormented by nightmares or feel negative energy around you, wearing a Ruby stone can help push them away.

Ruby holds dominion over the Manipura Chakra or the Navel area of your body. When stimulated, this chakra removes self-doubt and eases depression.

Side Effects of Wearing Ruby Stone

Who should wear Ruby Gemstone